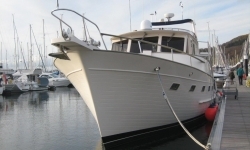 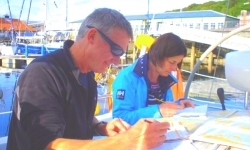 This is the ICC International Certificate of Competence for up to 4 persons aboard your own vessel, at your home marina or custom location throughout the U.K. & Europe.

The ICC is a certificate which is intended to provide evidence of competence when requested by officials in foreign countries.

It is issued under the United Nations Economic Commission for Europe (UNECE) Inland Transport Committee Working Party on Inland Water Transport Resolution 40. It is this resolution which details how and to whom the ICC may be issued, the syllabus requirements, the layout of the certificate and it also lists the countries which have notified the UNECE Secretariat that they have accepted the resolution.

The UK Government has accepted Resolution 40 and has authorised the RYA to issue the ICC on its behalf.

The origin and history of the ICC

The ICC was originally created to facilitate pleasure navigation along the length of the rivers Rhine and Danube.

The evidence of competence required, differed for each of the countries the rivers pass through, which caused difficulties. The United Nations Economic Commission for Europe (UNECE) Inland Transport Committee Working Party on Inland Water Transport sought to find a solution.

The rules surrounding the issue of the ICC were initially detailed in Resolutions 13 and 14, but it is Resolution 40, which was first adopted in October 1998, which now regulates the ICC.

Over time, the ICC has evolved into a document which enables boaters to evidence their competence when visiting both the inland waterways of Europe and European coastal waters.

So what does the ICC do?

When you visit another country, in most circumstances (in accordance with the United Nations Convention on the Law of the Sea) you can be required to comply with the maritime legislation of the visited country (Coastal State) in addition to that of your vessel’s country of registration (Flag State).

The regulations for pleasure craft can vary considerably from one country to another and the regime for skipper training and licencing can be equally disparate; the ICC helps to overcome the difficulties these differences can cause.

In other words it is an assurance from one government to another that the certificate holder is sufficiently competent to be driving a pleasure craft, despite not holding the visited country’s national certificate.

Formal acceptance of the ICC

The ICC is however a far more useful document than the Resolution’s formal acceptance would suggest.

The ICC may be acceptable for visiting foreign flagged vessels, foreign flagged vessels being kept in the Coastal State and/or vessels flagged in the Coastal State. It should never be assumed that the ICC will be accepted as an alternative to the national qualification of the vessel's flag state. The onus is on ICC holders to determine its acceptability by foreign states, as the ICC was never intended to be an alternative to individual national qualification requirements.

What does the ICC not do?

The validity of the ICC is frequently misunderstood. The ICC is not the boating equivalent of the EU driving licence for road vehicles, which all EU member states are obliged to accept.

The ICC’s validity is in fact determined by the visited country, so it is not a truly international qualification. It is nevertheless a valuable document when boating abroad as the ICC is the only international evidence of competence that exists for pleasure boaters in Europe.

With the exception of certificates where the power category is restricted to vessels up to 10m length overall, an ICC does not state the maximum size of vessel the certificate is valid for. Such limits vary from country to country and are determined by the country in which the certificate is being used.

The RYA is frequently asked how far offshore the ICC is valid. On the high seas or in UK territorial waters the applicable legislation for a UK flagged boat is the UK Merchant Shipping Regulations. This legislation does not require the skipper of a pleasure vessel to have an ICC, therefore the UK ICC issued by the RYA only becomes relevant within the territorial waters of another country, and the visited country determines the ICC’s validity.

Restrictions imposed by the visited country on the validity of the ICC most commonly relate to the size of the boat. But the visited country could also restrict how far how far offshore you can venture, the type of boat you can use or could decline to accept the ICC altogether. Such restrictions are most likely to apply to smaller boats especially open boats and boats that are kept in a foreign port or are launched from foreign shores. Owners should check the local regulations before launching.

Restrictions may also apply when chartering abroad and charterers should consult the charter boat provider for advice.

The national legislation of a country provides a good indication of whether restrictions are likely (and together with local regulations would ultimately determine what restrictions can be imposed and the possible penalties for non-compliance).

It is up to you to make the necessary enquiries to ensure the UK ICC issued by the RYA is the correct document specific to your circumstances.

The ICC cannot be commercially endorsed and should never be used as evidence of competence for commercial activities.

The ICC issued by the RYA is issued on behalf of the UK Maritime and Coastguard Agency (MCA); it does not entitle you to any other certificate (in the UK or abroad).

Get qualified to charter worldwide

Cruise Travel offers individual approach to every client. If you are looking for a spectacular cruise with lots of emotions and want to be treated professionally, feel free to contact us.

We partner with companies that provide extended health insurance so you don’t have to worry about it instead of preparing for your cruise and planning your amazing experience.

Everything special starts from the basics, and when it comes to a cruise, we are ready to plan it for you before you book it to be sure you’ll have the best experience.

Deposits start from just £49 to secure your reservation, with balances normally due 28 days prior to departure. You'll get a free SMS and e-mail reminder too!

Cancel for a full refund of anything paid, change dates or any aspect of your booking at any time up to 28 days prior to departure, without having to provide a reason. There are no charges for making any amendments to your booking, such as changing attendees or their details.

Any money you pay via our platform is held securely and separately until AFTER you have fully received the service.

No Booking or Credit Card Fees.

We never charge any booking fees or credit / debit card transaction charges. Ever.

You will always see everything that's included and anything that isn't, before you making a booking.

We're professional sailors & Instructors. We personally verify and vet the details of every course, experience or yacht on our platform, to ensure it meets and exceeds every safety regulation, and our own high standards.

For my first cruise we could not have asked for anything better. The ship itself was and is magnificent. It is the second largest passenger ship at sea. From services to destinations and entertainment, everything was fine.

To start with, I was a first time cruiser. Reading some reviews on other websites kind of scared me a bit, but I can honestly say, I am hooked. The staff was extremely friendly, well groomed and genuinely happy all the time! They made our cruise amazing.

For travelers who like a combination of cosmopolitan cities, exotic landscapes and colonial history, Asia makes a compelling alternative to the more laid-back sun and sea cruise destinations.

If you want to get your catamaran vacation fix this winter (or next summer) and want a unique experience, consider one of the following destinations described in this article.

Keep up with our always upcoming news, updates, events, and special offers. Enter your e-mail and subscribe to our newsletter.